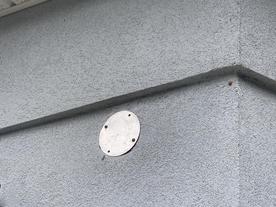 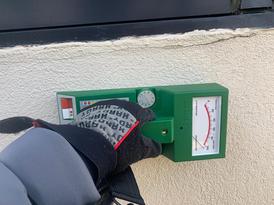 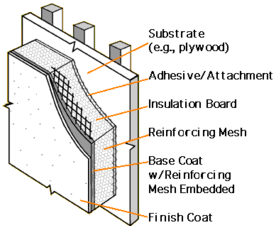 The original EIFS stucco cladding used in residential construction was designed to be a complete water barrier system, theoretically 100% waterproof. This "Barrier EIFS" was installed on thousands of homes all over America. There was no provision made to drain water that may penetrate a barrier EIFS. Manufacturers have recently begun to market a new generation of EIFS, supposedly to solve the problem by allowing drainage. The new "drainable EIFS" cladding is more difficult to install, and its effectiveness and reliability have yet to be proven. The new system provides little consolation to thousands of homeowners whose houses, condominium units and townhouses are clad with a barrier EIFS. Without the ability to drain water, moisture penetrates the face of a barrier EIFS and gets trapped within the wall hollow. Eventually, the home absorbs this moisture. Now it is only a matter of time before bordering materials begin to decompose and decay. In many cases, the home's framing also rots, causing structural harm.

The Potential Problem with EIFS...

The potential problem with EIFS is that moisture can get trapped behind the highly water resistant material with no way out. This can cause the framing to rot and foster the growth of mold between the exterior and interior walls. Damp and rotting wood is also a prime target for subterranean termites. It should be stated that the potential for these conditions exist with any type of exterior siding product be it brick veneer, wood, or vinyl siding. The potential for this condition with EIFS however can be exacerbated by its superior water resistance. Once moisture gets in, regardless of its origin, it usually has no escape.

The main locations where water tends to infiltrate into the framing structure of a building using an EIFS is around doors and windows, where the roof connects to the EIFS (roof flashing), and below extended exterior deck connections. Also, any moisture from within the home trying to find a path out will likely be thwarted by the EIFS.